Consumer Biography - Change this value to a strong SEO phrase

Aaron is a CLASS participant and I have the honor of working with him. On paper, his diagnosis of Spina Bifida including hydrocephalus sounds limiting, but in real life it is anything but. Aaron lives in a small, quaint town an hour outside of Victoria called Hallettsville. There, Aaron lives a full, productive life.

Aaron has a love for art, history, music, and culture. At home, his walls are adorned with drawings, prints, paintings, and original art work. In addition to art, Aaron collects hats, jewelry, rock and roll themed memorabilia, and other cool things which make it clear that Aaron has a zest for life and an eclectic personality.

Aaron has a strong sense of duty and has spent much of his life volunteering in his community. He is active in his town and involved in various projects. He currently volunteers at the Hallet  Oak Art Gallery as a docent and sit on the gallery’s Board as Treasury Assistant. Before that, he spent many years volunteering in educational settings.

This past year alone Aaron has been recognized for his volunteerism and overall congeniality entities such as the Hallettsville Chamber of Commerce and Agriculture, Governor of Texas, and historical Hallet Oak Art Gallery.

In January, Aaron was nominated for the prestigious honor of being called the “Citizen of the Year”. Though he did not win, his dedication was recognized amongst his peers and colleagues during the reception and he received a recognition award.

Aaron was also recognized by the Governor of Texas, Greg Abbott, and awarded honorary “Admiral in the Texas Navy” in March for his work preserving the regional history of Hallettsville and that of the state of Texas.

Most recently, Aaron premiered his art exhibit at the Hallet Oak Art Gallery on May 13th. The reception brought in visitors locally and from surrounding areas and Aaron was featured in his local newspaper. His art was varied and included mixed media and drawn pieces. It shed light onto his disability, his life experiences, and his propensity for hope. Like Aaron, his work was vibrant, bold, inspiring, and told a story of his faith and valor.

Aaron is a fascinating individual, who happens to have a disability, and his story deserves to be shared with the masses. 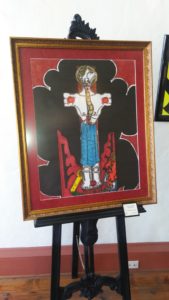 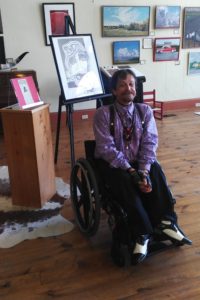